The Zwinger is, along with the Frauenkirche and the Semper Opera, one of the largest buildings in Dresden. The huge building with courtyard and garden is located in the heart of the old town not far from the Elbe. The Zwinger is one of the most famous buildings from the baroque era. It is the most important building, which August the Strong had built. The Duke of Saxony built a large part of the baroque buildings in Dresden. The Zwinger Dresden was built at the beginning of the 18th century. 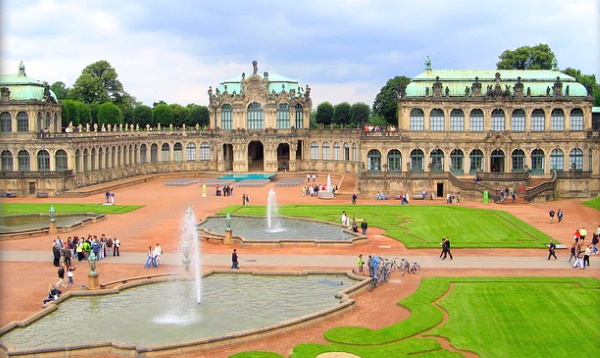 Today the kennel houses several very important museums. Originally the kennel was mainly an orangery, a garden and a fairground. Well known are among other things the many small works of art like decorations, statues etc. Also the gigantic size of the building and the courtyard that is more than one hectare big is more than impressive. The two most important architects of the Dresden Zwinger commissioned by Prince August II were Matthäus Daniel Pöppelmann and Balthasar Permoser.

The name Zwinger is a term from the Middle Ages. It is the area between the inner and outer fortification wall of a castle or building. It is the area on which an attacking enemy must be defeated (defeated therefore Zwinger).

For today’s visitors to the kennel, the Great Court is very impressive. The square with many small green spaces and fountains (see picture at the top) is more than one hectare or about 2 football fields in size. Many things on the big yard also date back to later times, partly also from the beginning of the 20th century.

Mighty stands on one side of the kennel the crown gate. It is considered the main entrance of the kennel. Above the gate is the large black Polish crown of August the Strong. He was not only Prince of Saxony, but also King of Poland for several decades. That is why the 4 Polish eagles are at the king’s gate.

Not to be missed in the Dresden Kennel is the Nymphenbad, a great and large fountain (water feature).

On the side of the Dresden Zwinger towards the Elbe and the Semper Opera House, a large building was erected much later, the Sempergalerie. It dates from the middle of the 19th century. Today it houses a large art museum, the Old Masters Picture Gallery.

Among the museums in today’s Zwinger, the Old Masters Picture Gallery is the most famous museum. It is one of the most important art museums in Germany. Outstanding is for example the collection of paintings from the Renaissance.

Two other very famous exhibitions in the Dresden Zwinger are the Mathematical-Physical Salon (measuring instruments, clocks etc.) and above all the magnificent collection of porcelain. It is the second largest porcelain collection in the world, the largest is in Turkey. In the Porcelain Museum in the Dresden Zwinger (official name: Porcelain Collection) there are exhibits from Asia such as China and Japan as well as from Europe. Many of the Asian works are from the time before porcelain was invented in Europe at the beginning of the 18th century. But you can also find many exhibits made of Saxon porcelain as well as from Meissen. Both the porcelain collection and the invention of porcelain in Europe go back to August the Strong.

Entrance fee Zwinger Dresden 2020: You can enter the building complex free of charge. Only the visit of the museums costs something. The 3 museums Gemäldegalerie Alte Meister, Porzellansammlung and Mathematisch-Physikalischer Salon cost, as far as we know, 6 Euro admission each for adults. There is also a ticket for all 3 museums in the Zwinger for 12 Euro.

Opening hours Zwinger Dresden 2020: To our knowledge the outdoor areas are open all day every day. The 3 museums have opening hours from 10am to 6pm. Monday is closed. In 2019 the Gemäldegalerie Alte Meister will be renovated. Therefore the gallery will be temporarily closed or only limited visitable (until about March 2020).

Video with impressions from the kennel in Dresden