The Semperoper in Dresden is one of the very large opera houses in Europe. It is located directly in the heart of the old town not far from the Elbe. You can visit the Semper Opera House for one of the many performances. But also a visit to the opera house during the day as part of a guided tour is possible. Especially inside, the famous opera of Dresden is incredibly beautiful.

A guided tour of the Semper Opera House can be booked online in advance. Then you will surely have a ticket, the guided tours are very popular:  >>> More information and booking 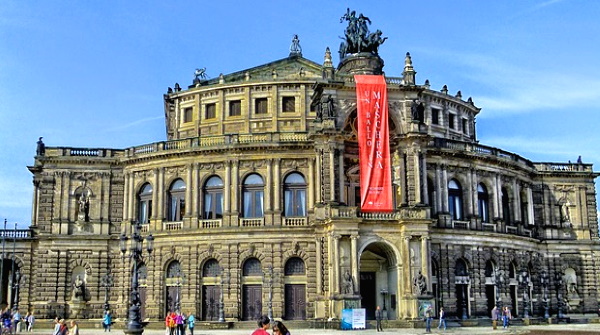 Already in the 18th century there was an opera in the nearby Zwinger. Between 1838 and 1841 the Semperoper was built for the first time. The architect was Gottfried Semper, after whom the opera is named today. After a few years in 1869 the opera house burned down and the Semper Opera was completely destroyed. A new opera house was quickly built, again designed by Gottfried Semper, but the construction manager on site was his son Manfred Semper. A second time the world-famous opera house of Dresden was destroyed by aerial bombs in 1945. It came again to the reconstruction. It was not until 1985, when the GDR was still in power, that the Semper Opera House reopened. The first performance was a major event in the GDR. It was the opera “Freischütz” by Carl Maria von Weber. As there were still many old plans and letters from Gottfried Semper, the theatre could be rebuilt very true to the original. This also applies to the magnificent decorations inside as well as to the murals and other things. For many connoisseurs it is the most beautiful and best opera house in Germany. The new building after the war is regarded as one of the greatest achievements of the architecture of the GDR, similar to the Television Tower Berlin.

Book a guided tour through the old town of Dresden on the Internet for only 8 Euros:  >>> More information and booking

Guided tours Semperoper: There are many guided tours of the opera house in Dresden every day. The majority are in German, but there are also guided tours in other languages. A tour with an explanation takes about 45 minutes. We found our guide very competent and good. If you come to Dresden as a visitor, you should definitely book a guided tour of the most famous opera house in Germany. A guided tour through the Semper Opera House can be booked online in advance. Then one surely has a ticket, the guided tours are very popular:   >>> More information and booking 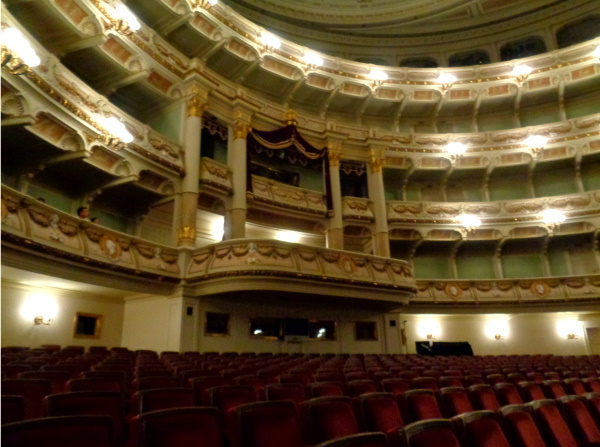 Today, the Semper Opera House hosts performances on most days of the year, sometimes two a day. In the past, the Semperoper was also a theatre, but today it is a pure music theatre. In addition to classical opera, the programme also includes ballet, operetta, concerts and musicals. There are gigantic performances with hundreds of employees, many of them backstage.

The opera is extremely well attended, the majority of the performances are sold out. In the building in Dresden there have been many famous premieres in history. These include world-famous works such as “The Flying Dutchman” and “Tannhäuser”, both by Richard Wagner. As a tourist in Dresden, you should buy tickets on the Internet before you travel if you want to visit an opera in Dresden.

Short video with impressions from the opera house in Dresden

A guided tour of the Semper Opera House can be booked online in advance. Then you will surely have a ticket, the guided tours are very popular:  >>> More information and booking