In this article you will find all the information about city tours in Leipzig: tickets (online), all the info and booking.

The red double-decker buses leave directly opposite the big street in front of the main railway station at the entrance to the city centre (corner of Richard-Wagner-Straße 2 and Ritterstraße). Except from our point of view it is the best city tour in Leipzig. 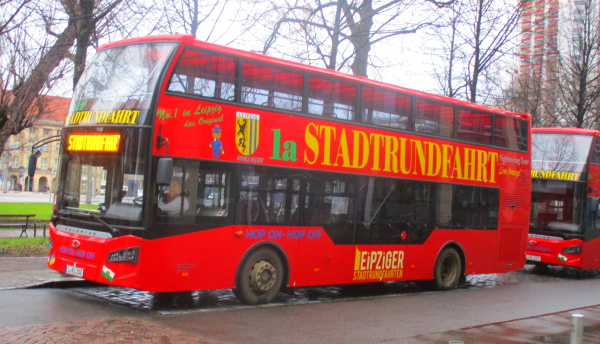 In good weather during the warm season, the roof on the upper floor of the buses is open. So you can see more and take better photos. The trip takes about 90 minutes. There is a guide on the bus who speaks into a microphone. This is broadcast throughout the bus via loudspeakers.

We passed virtually all the important sights outside the city centre. The bus cannot go directly into the centre of Leipzig, as almost everything here is a pedestrian zone.

You can see, for example, the zoo, Augustusplatz with the Gewandhaus, opera etc., the Panorama Tower, the Monument to the Battle of the Nations, the Red Bull Arena, canals and waterways, the Federal Administrative Court, the German National Library, exciting districts like Plagwitz, the Panometer and dozens of other sights. Our guide Bärbel, a real Saxon, gave us lots of information and had a great sense of humour. One of the best city tours of our lives.

The red city tour buses are hop on / hop off buses. If you want, you can get off at about 10 stops at sights and continue on a later bus. The buses run at intervals of 30 to 60 minutes, depending on the time of year. On our trip, however, no one got off; all 20 or so participants did the complete 1.5-hour tour.

We thought it was great that there was another member of staff on the bus in addition to the driver, a real city guide and not a tape. This is of course especially an advantage if you know German. Our guide Bärbel was a real Leipziger who had a good sense of humour and also experienced the GDR in Leipzig.

In addition, the company of the red Leipzig city tour buses also offers a guided tour on foot through the city centre. This is already included in the ticket price and is after the bus tour.

This is the competing company. They also offer city tours of 90 minutes, the route is quite similar. You can also get off and continue with a later bus with the same ticket (Hop on / Hop off).

The buses run similarly often. There is also a tour guide / speaker directly on the bus. All quite similar to suggestion 1 (red buses above). The departure point near the main station is also next door, about 40 metres away. They are also double-decker buses. However, as far as we know, both floors of the blue city tour buses are also closed in summer. So no open-air deck or “topless bus”, as many say, like the red competition.

So there is hardly any difference between the two proposals. Also, both have extremely good ratings on the internet from participants. The blue buses even have slightly better ratings.

The prices of the tours are also similar, you pay about 15 to 18 euros per person. In winter it is often a little cheaper than in the season. This price is for a day ticket with getting off and on as often as you like.

The red Leipzig sightseeing tour, however, is a little more popular. The big advantage of the red buses is that a guided tour of the city centre on foot is included after the bus tour. That’s why we recommend the red sightseeing buses. Tickets should be bought online (see links).

Note: There is also a combined ticket for a city tour with the blue buses and admission to the popular and fantastic Leipzig Zoo: >>>   Booking and more info Blue Buses Leipzig with Zoo Admission 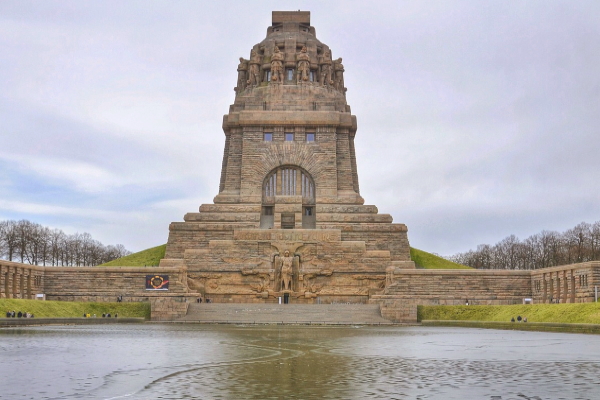 The Monument to the Battle of the Nations is probably the most famous sight in Leipzig, about 2 km from the city centre.