The Frauenkirche in Dresden is probably the most famous Protestant church in Germany and one of the largest sandstone building in the world. It is located in the middle of the city, only a few steps away from the other great buildings of Dresden like the Dresden Zwinger or the Semper Opera House. According to most statistics the Frauenkirche is the most famous building in Dresden.

The Frauenkirche was consecrated in 1743 and soon the church made of light sandstone became very famous throughout Europe. Sandstone was chosen in the 18th century because the stone was quarried nearby at the river Elbe (Elbe Sandstone Mountains) and could easily be transported to Dresden by ship. Furthermore, the light sandstone was considered chic at that time. However, the stone became darker and darker over the decades and centuries. When it was destroyed in 1945, the church was already almost black after a good 200 years.

In February 1945 the Church of Our Lady Dresden was completely destroyed by bombing (bombers from the USA and Great Britain) like almost the whole city of Dresden. The Frauenkirche collapsed. In the GDR there was not enough money for reconstruction. The ruins of the Frauenkirche simply remained lying around for decades. In the GDR the ruins of the Frauenkirche Dresden were the most important memorial against war and for peace. It was the most famous war ruins in Germany. Only after the fall of the Berlin Wall was the Frauenkirche Dresden rebuilt true to the original, mainly with money from donations. The reconstruction is considered to have been a success and cost about 180 million Euros. 110 million of this was donations, many from abroad as well as from the USA. The Frauenkirche was reopened on 30.10.2005.

Video: Construction of the Frauenkirche in fast motion

Today the Frauenkirche with its mighty dome is one of the most famous churches in Germany. Very well known is also the altar and the organ above (see picture). The altar is world-famous and was largely found in the ruins and rebuilt. Some parts are also new. 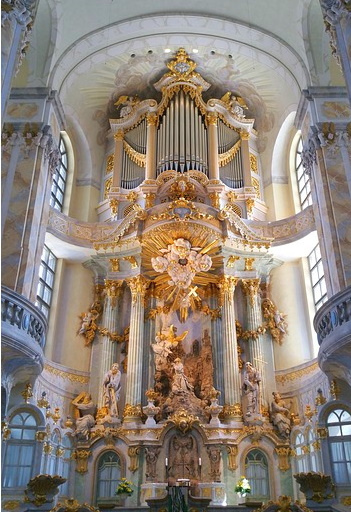 The golden cross at the top was built and donated by Great Britain. The organ is new and was built by the company Daniel Kern from Strasbourg. Daily there are small organ concerts in the Frauenkirche Dresden. A visit during a concert is worthwhile.

Admission prices Frauenkirche Dresden: Admission to the famous church in Dresden is usually free. This is one of the reasons why the Frauenkirche is one of the most visited sights in Saxony. During our visit on a morning during the week there were more than 100 people in the church.

Opening hours Frauenkirche Dresden: Monday to Friday usually from 10 am to 6 pm, with a lunch break from 12 pm to 1 pm. Saturday, Sunday and holidays are only open in the afternoon. The round church has several entrances. The free visitor entrance is entrance D (note: D for Dresden).

The Frauenkirche is the most important building on the large square Neumarkt, the central square in the old town of Dresden. The Martin Luther monument in the middle of the square and the Dresden Transport Museum on the other side of Neumarkt square are also well known. Neumarkt has only been rebuilt in recent years. There are also some hotels, restaurants, shops and a small shopping centre (QF-Passage). In the basement there is the very good tourist information of Dresden.