The Gläserne Manufaktur is a production facility for electric cars in Dresden. Currently (beginning of 2020) the e-Golf is produced here. Since visitors can see large parts of the production from close up during a guided tour, the Transparent Factory has developed into a tourist attraction. Guided tours take place at least every hour (duration about 75 min, only 7 Euro, 2020). 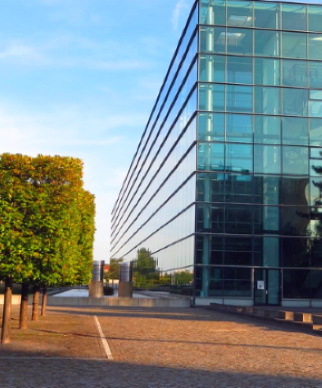 It is an extremely modern car factory. In the Gläserne Manufaktur VW does a lot of research, new production processes and robots are tested. It is a small plant, daily about 70 to 80 electric cars are produced in 2 shifts, about every 12 minutes a Volkswagen e-Golf rolls off the production line.

The Glaeserne Manufaktur (Transparent Factory) is an extremely modern car factory. First Volkswagen produced the luxury car Phaeton (2002 to 2016), since 2017 the electric Golf. Also the architecture of the building, a lot of glass, is hypermodern and very interesting.

You can only visit the car factory in Dresden as part of a guided tour. Guided tours in German take place at least every hour, there are also guided tours in English and other languages.

A ticket for the factory tour costs only 7 Euros for adults, considerably less for children. To compare what you get to see, a real bargain. The guided tours are often fully booked on site. One then only gets a ticket for hours later or for another day.

Fortunately, however, you can book guided tours of the Glaserne Manufaktur in advance on the Internet.

Procedure of the tour

For us, the guided tours through the Gläserne Manufaktur Dresden were an absolute highlight. Very interesting for everyone who is interested in technology or cars.

Almost the whole tour is directly in the car production. It begins with the bodywork. In more than 60 steps the floor, windows, fittings, engine, battery etc. are installed. At some steps you can watch for a few minutes. You stand only a few meters next to the workers or robots. Only a blue line on the floor, which visitors are not allowed to cross, separates the production from the visitors. There are expert comments from the guide.

The highlight for us was a robot that installs the windows. It takes him only a few minutes to install the windscreen and the rear window. We also liked another robot, which installs all 4 wheels. Many work steps are also still done by hand. About 100 workers are employed on the assembly line per shift. Also great are the automatically moving vehicles that deliver parts to the respective production step.

Unfortunately it is not allowed to take pictures in the production. But in the short film below you can see some pictures from the car factory.

We were also very impressed how clean and quiet such a modern car factory is. No dirt, no oil on the floor, no noisy machines. Also there is no hectic. All workers seem relaxed.

The guide will of course give you lots of details about the Gläserne Manufaktur, Volkswagen Dresden and the e-Golf. Altogether a very entertaining and interesting tour (about 1.25 hours). There is probably no better place in the world to experience a car production as a visitor than in the Dresden Transparent Factory. Absolutely recommendable!

Opposite the car factory “Gläserne Manufaktur” is a small shopping centre. Some restaurants, a bakery and a REWE supermarket are here.

There is also a cafe in the manufactory. There are lockers for jackets and bags (1 Euro deposit, also larger compartments for large luggage) as well as clean toilets in the Gläserne Manufaktur.

In the public area there are some great cars from Volkswagen on display, also modern electric cars, prototypes from VW and much more. For this reason alone it is worth a visit. 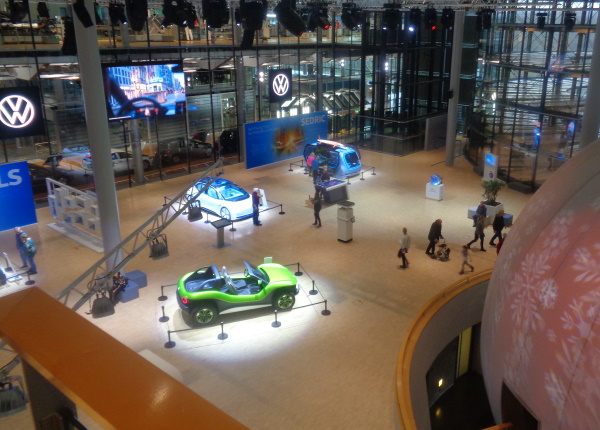 Once again: Be sure to buy tickets for the guided tours in advance, often sold out on site. Even on a weekday in the middle of December we did not get tickets for the next hours: