Dresden has over half a million inhabitants and about 65 churches. Most of the places of worship are outside the city centre in the city districts. The majority of churches in Dresden are Protestant. Like everywhere in eastern Germany, only a few residents are members of a church, only about 20% of Dresdeners. About 80% of church members are Protestant, less than 20% Catholic. Or to put it another way: among Dresden’s 550,000 inhabitants there are about 85,000 Protestants and only 25,000 Catholics.

There are three very well-known churches in the centre of Dresden. They are the world-famous Frauenkirche (Church of Our Lady), the Hofkirche (Court Church) at the castle in the Old Town and the Kreuzkirche (Church of the Cross) at the large Neumarkt square.

Church of Our Lady (Frauenkirche Dresden)

The Frauenkirche Dresden is world famous. The large church in the old town on the central square Altmarkt was destroyed during the devastating air raids in February 1945. 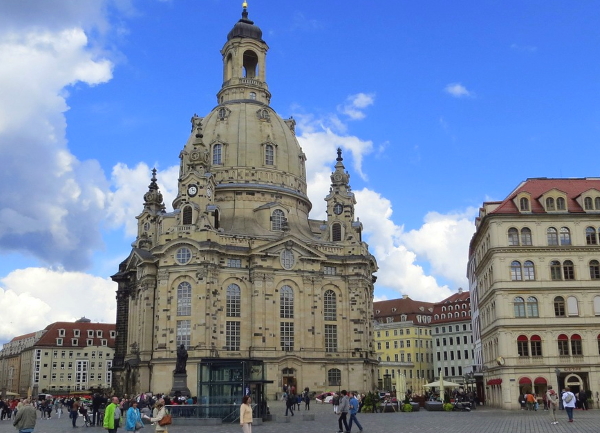 For decades, the ruins lay on the ground. The GDR lacked the money and the workers to rebuild the church. This was only achieved after the reunification, also with many donations. >>> Our article about the Frauenkirche

The church at the palace in the heart of the old town near the Elbe was also hit by bombs during the Second World War. The Hofkirche was rebuilt during the GDR. 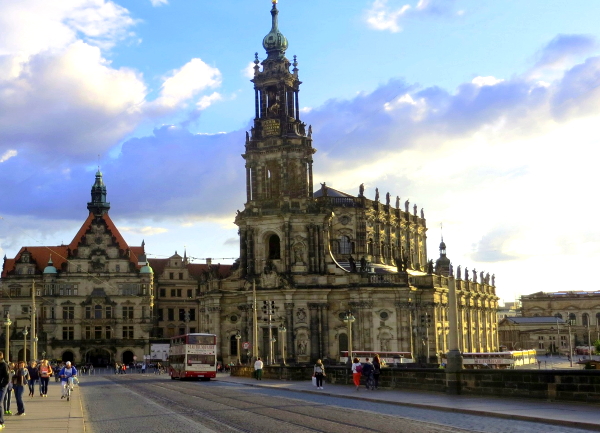 It is a Catholic church, built by Augustus the Strong >>> Our article about the Hofkirche

This large church is located directly at the Altmarkt not far from the Old Town. It is the main church of the Protestant faithful in Dresden. A church has stood on the site since the 13th century. It has been rebuilt several times or greatly altered. For example, the Kreuzkirche burned down in 1897 and had to be rebuilt. Dresden’s Kreuzkirche was also largely destroyed in the Second World War. The church has been called the Kreuzkirche since around 1388. Since 1538, after the Reformation, it has been a Protestant church. Interesting features of the square church building include the altar and the organ. The Kreuzkirche Dresden is open during the day, you can just walk in without paying an entrance fee. In an adjoining room there is a small photo exhibition on the Allied bombing raids on Dresden in 1945.

The Dreikonigskirche is the well-known church on the other side of the Elbe in Dresden’s Neustadt. Like almost all important historical buildings in Dresden, the Dreikönigskirche is made of sandstone from the Elbe valley. The building is from the 15th century, this church was also destroyed in the 2nd World War. It was rebuilt in the last years of the GDR (1980s). After the fall of communism, the parliament of Saxony met in the Dreikönigskirche Dresden for several years.

This mighty church was built for the soldiers of the Saxon Army in the last years of the 19th century. Dresden’s Garrison Church of St Martin is in the northern Alberstadt. This is probably the largest complex of barracks ever built in Germany. Very large church building.

This beautiful church in the Südvorstadt district was completed in 1874. 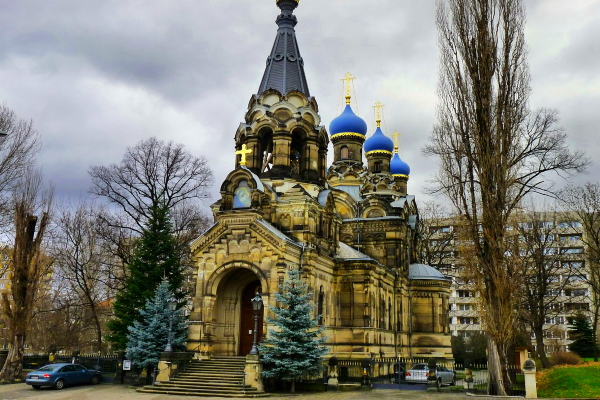 To this day, the Russian Orthodox Church is the place of worship for Orthodox Russians in Dresden. At present there are about 1000 people. The church is just under a kilometre south of Dresden’s main railway station.