Augustusbrücke (Augustus Bridge ) is the best known and oldest bridge over the Elbe in Dresden. The bridge is hardly used by cars. Augustusbrücke is mainly used by trams, cyclists and pedestrians. It connects the old town and the new town of Dresden directly in the city centre. 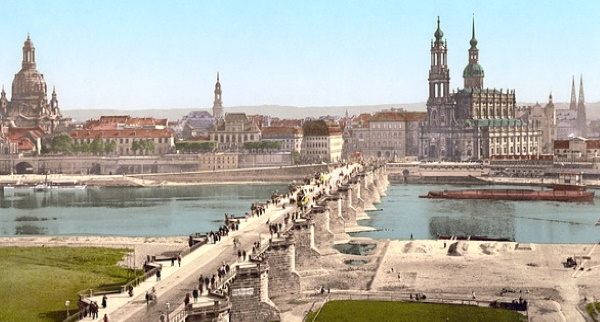 Since 2017 (status 2019) the bridge will be extensively renovated until 2020. The tram does not currently cross the Augustusbrücke. According to a decision of the city of Dresden, Augustus-Bridge will not be allowed to be used by cars after the reopening after the renovation. It will be a bridge for pedestrians, cyclists and public transport. By the way, you can also use Augustusbrücke as a pedestrian during the renovation. Only one side of the historic bridge is closed at a time (as of January 2020).

The first bridge at this place was already built around 1230, 1287 the first bridge made of stone, as today in small arches. In 1727 under August the Strong a larger stone arch bridge was built. Around 1900 the Augustus Bridge became too narrow at the top for road traffic and too narrow at the bottom between the arches for shipping traffic. There were accidents with ships. A better bridge was again built at the same place. The German Wehrmacht blew up large parts of the bridge a single day before the end of World War II. Augustusbridge was rebuilt by 1949.

The Augustus Bidge Dresden is very important for tourists. It is a very short connection for pedestrians between the old and new town. Big sights like Semper Opera, Zwinger and Hofkirche are on the side of Dresden’s old town only a few meters away from Augustusbrücke. If you go straight ahead from the bridge on the side of the Dresden Neustadt, you will find the famous monument Golden Horsemen, which depicts August the Strong on a horse, after about 150 metres.

Short film about the reconstruction of the Augustusbrücke