The Fürstenzug is a public mural in the old town of Dresden. The 102 meter long work of art is the largest porcelain painting in the world. The picture consists of tiles. These tiles are made of the famous Meissen porcelain, just over 23,000 pieces. The Furstenzug is on the outside of the Stallhof of the Dresden Castle, almost directly behind the famous church Frauenkirche. 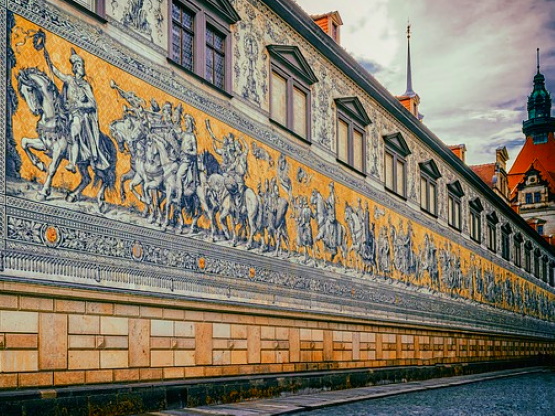 The gigantic picture shows the rulers of Saxony in history, such as princes, margraves, electors and kings. All rulers from 1127 to 1873 are shown with picture and name. The wall was first painted at the end of the 19th century. However, due to rain, snow and other environmental influences the painting was hardly visible after a few years. Between 1904 and 1907 the tiles from Meissen were made of ceramic. There were no joints between the tiles, so the work of art looks like a picture. If you look closely you can see the individual tiles (see picture below). 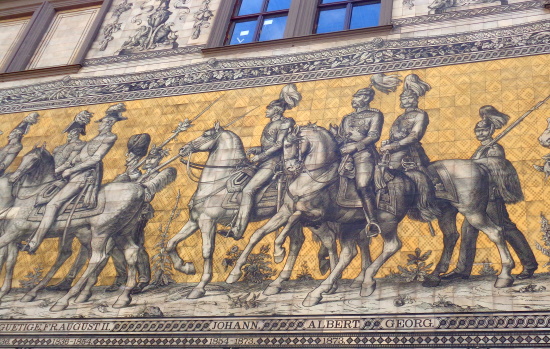 The Fürstenzug Dresden survived the heavy air raids in 1945 largely unscathed. The ceramic tiles withstood the high temperatures of the fires. The huge picture was only heavily sooty. During the times of the GDR it was cleaned and renovated. Only a few hundred of the over 20,000 tiles had to be renewed. The picture Furstenzug is in the Augustusstraße.

The large picture is freely accessible. So there are no entrance fees or opening hours for the Fürstenzug.

Besides the illustrations, the names of the rulers on the picture Fürstenzug are also interesting. Some of them have “nicknames” of kings, princes etc.  The following Saxon rulers are shown (taken over from Wikipedia):

Also interesting are the weapons of the rulers on the princely procession. There are persons with knives, swords, foil, epee, spear and much more. About half of the 94 people in the picture are sitting on a horse.